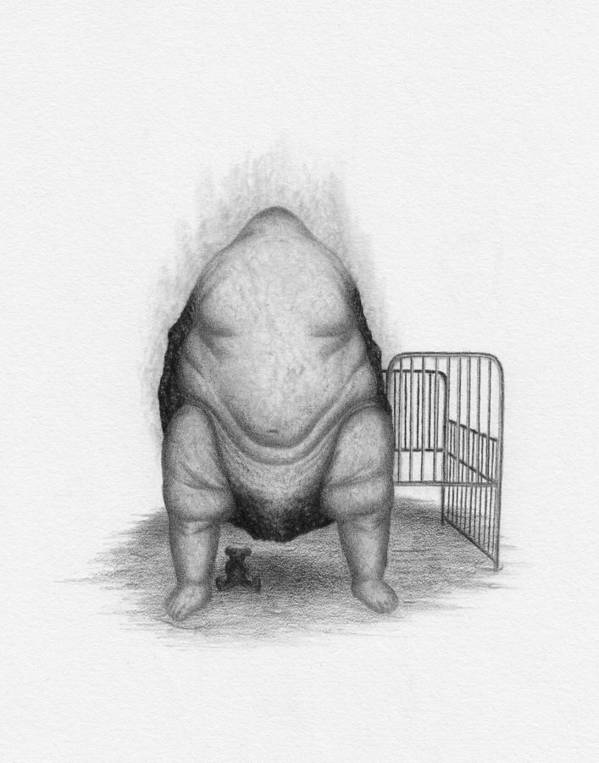 Loaded - Artwork poster by Ryan Nieves.   Our posters are produced on acid-free papers using archival inks to guarantee that they last a lifetime without fading or loss of color. All posters include a 1" white border around the image to allow for future framing and matting, if desired.

This drawing is part of the series of Blackhaven Anomalies. This series illustrating the general threats, hauntings, and strange occurrences that plague the dark corrupted world of the alternate Blackhaven Institution.One of the most repugnant stenches in all of the alternate Blackhaven Institution radiate from these malformed masses of flesh that are found in the Nursery Wing. These having manifested from the infants who had experienced the utter discomfort and congested feeling of being confined in ones own searing waste in a super heated room devoid of air. The stench these demons give off is a reflection of this, giving those who startle them an absolutely debilitating dose of concentrated suffering... Other Blackhaven Profiles: http://pyramiddhead.deviantart.com/gallery/45457103/Blackhaven-Demon-ProfilesJoin my email list for updates at http://theartofpyramiddhead.com/subscribewebsiteemaillist.htmlFind Originals, Prints, and Books on my website at www.theartofpyramiddhead.comFol...