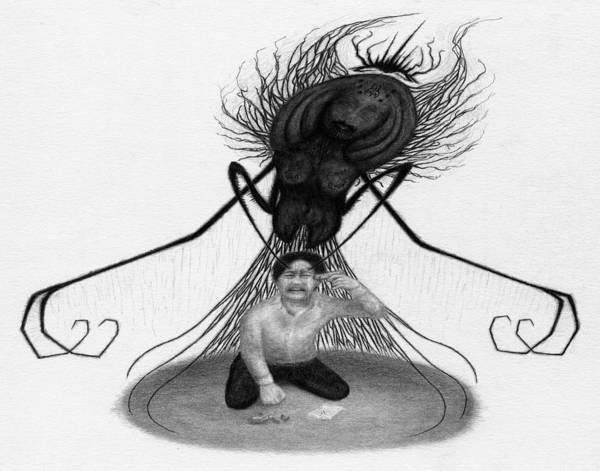 The Demon Left With Him... - Artwork Poster

The Demon Left With Him... - Artwork poster by Ryan Nieves.   Our posters are produced on acid-free papers using archival inks to guarantee that they last a lifetime without fading or loss of color. All posters include a 1" white border around the image to allow for future framing and matting, if desired.

"Angels And Demons" series will present 3 pairs of drawings with similar yet contrasting narratives and visuals based on either the perspective of an angel or a demon, focusing on the elements of tragedy and drama associated with each one. Piece #4 - The Demon left with him - "His hands trembled, the cold steel braced his skin, one more motion he hoped to drive away, the demon left with him..." It was a summer years ago, when Gwang-Jin found So-min... Though they had went to the same school they never acknowledged each other as they where both introverts in their own respect. Avoiding most people and especially each other. Most students, girls and boys feared Gwang-Jin. After wrong negative rumors spread about his character. Students having seen him sleeping in the streets and then making up stories that he attacked his parents and was kicked out, now taking out his frustrations attacking people in the streets. So-min was a very beautiful yet very shy girl, many girls in the school g...