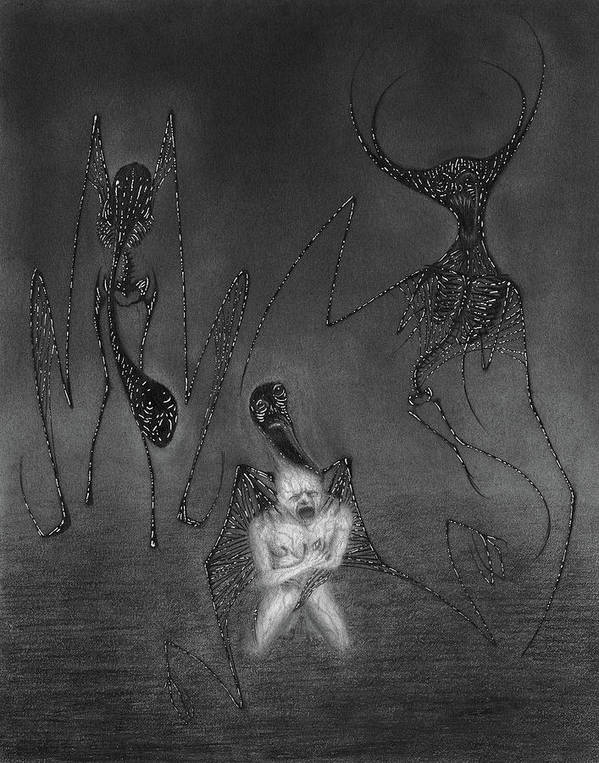 The Demons Will Know... - Artwork Poster

The Demons Will Know... - Artwork poster by Ryan Nieves.   Our posters are produced on acid-free papers using archival inks to guarantee that they last a lifetime without fading or loss of color. All posters include a 1" white border around the image to allow for future framing and matting, if desired.

"Angels And Demons" series will present 3 pairs of drawings with similar yet contrasting narratives and visuals based on either the perspective of an angel or a demon, focusing on the elements of tragedy and drama associated with each one. Piece #6- The Demons Will Know...- “His body shivering in the darkness below, descended for what he had done, the demons will know...”Continue below to read the full story behind this quote and this piece.When Kevin heard the news that his cancer has relapsed, his renewed sense of life after that dark struggle had collapsed. Though not the always the nicest person, his illness had changed his ways. Sent him on a path of redemption where he met Hye-Mi, when the negative thoughts were urging him to stray. In meeting Hye-Mi he found a reason to love, a reason why he was previously cured and not taken above. He never knew a girl so pure, a girl so beautiful, that her presence could melt his cold heart like the snow. From his darkest times they became...